Wireguard VPN Server- Has anyone set one up, say at home?

Pretty much as the subject line states.

Without completely understanding what I am saying here . . . I was thinking that I could set up a Linux Machine and then, via Virtualbox, launch a WireGuard Server that I would leave running constantly.
I'd then use that WireGuard Server to remote into my internal network.

I'm guessing I'd have to set up port forwarding in the router to the WireGuard Server (not sure how else I'd be able to get to it otherwise).

I'm curious to know if anyone else has had any luck doing something like this, and how they went about it.

Just a thought, but maybe spinning up an entire virtual machine dedicated to Wireguard might not be the most efficient setup. Wireguard is baked into the most recent kernel versions, so it's mostly a native Linux feature by now. It is very lightweight. You just need to install the CLI tools to manage it. A lot of tutorials are available today. 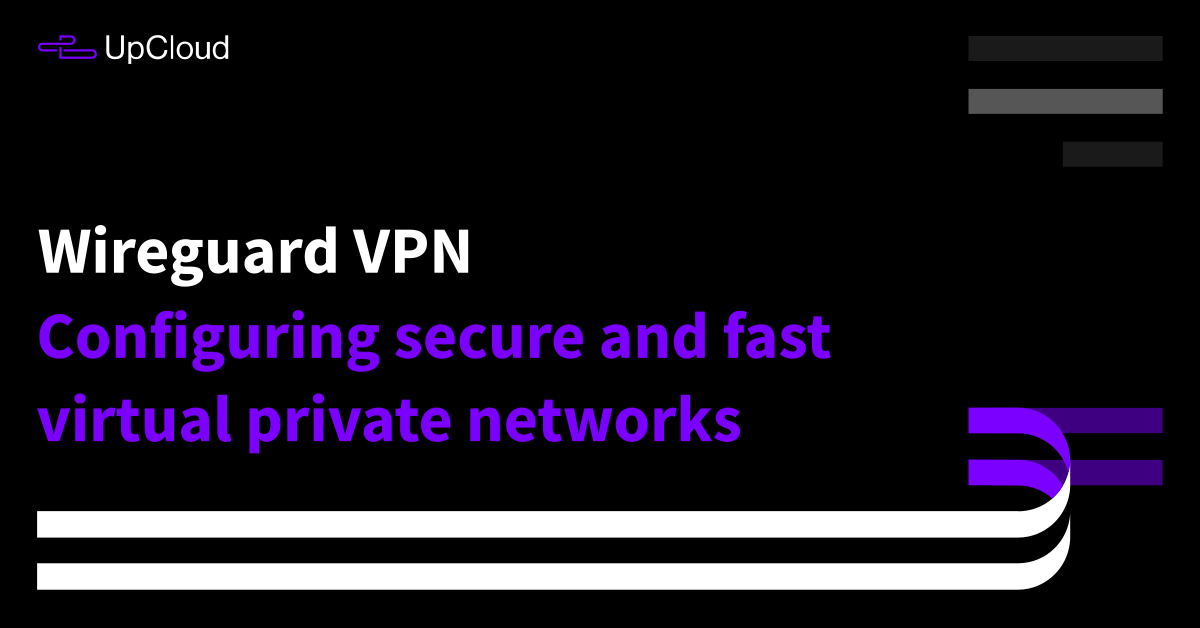 How to get started with WireGuard VPN

WireGuard is a fast and modern VPN that utilizes state-of-the-art cryptography. In this tutorial, we will set up WireGuard on Ubuntu 18.04 server.

At home, you will need to fowared UDP ports to the Wireguard service. Probably easier to keep those fixed and statically routed.

I have used the https://github.com/WireGuard/wireguard-vyatta-ubnt package to run Wiregard on my ubiquity router. The performance is about 1 order of magnitude better than OpenVPN on the same box (5mbps vs 50mbps)
Last edited: Dec 13, 2020
W

I set it up on my edgeRX router. Very easy to setup. However, I really have not had to many opportunities to use it.
G

Thanks JulioHM for the link! That's way better than running a VM to act as a server:

uncomment the following line by removing the # at the beginning of the line.


Code:
Once done, save the file and exit the editor.

ScruffyDan said:
I have used the https://github.com/WireGuard/wireguard-vyatta-ubnt package to run Wiregard on my ubiquity router. The performance is about 1 order of magnitude y better than OpenVPN on the same box (5mbps vs 50mbps)
Click to expand...

Hey ScruffyDan, thanks for the link.

This could come in handy actually. I have a buddy that a first gen USG. Do you know if Wiregard would be able to run on this gateway?

GregM said:
Hey ScruffyDan, thanks for the link.

This could come in handy actually. I have a buddy that a first gen USG. Do you know if Wiregard would be able to run on this gateway?
Click to expand...

That is what I run it on. it works great!
D

I have installed it today on a VPS, if you want to do it on your home/local network, you will probably have to have a device (lets say a raspberry pi) that has to be always on. I can help you with installation, it is a bit weird to set up and add users to be honest but once you figure it out its very good.
P

This guy seems to have some war stories he's sharing: https://jrs-s.net/category/open-source/wireguard/

The Beryl (GL-MT1300) from GL.iNet was just introduced. Its a small travel router that runs OpenWRT and sells for $70. It supports WireGuard. I *assume* the client side rather than the server, but you can install apps, so maybe? a server too? I have not used it, just an FYI.

Has anyone tried setting up a Wireguard VPN server on OpenWRT? I'm wondering if putting on the router is a bad idea? Usually it's a good idea to have dedicated devices for dedicated purposes if possible.

Running VPN software, be it client or server, on a router is a bad idea, in my opinion. To begin with, there is CPU overhead. As for a server, it means poking a hole in the router firewall. As for client software, there is the decreased speed every VPN entails that now impacts all devices rather than just one or two. More importantly, you don't want a VPN failure to knock you completely off-line. Or, to expose all your devices. Yes, some VPN client software can kill all traffic if the VPN tunnel fails, but why depend on that. VPN client software is a good match for a second router, one plugged into a LAN port of the main router.
G

Lightsail has a 512Mb Ram, 1Ghz CPU, and 20GB's of Drive space.
I loaded Ubuntu's 20.x server on and installed WG.
Configured it and 'voila.

This is probably for another tread, but does anyone have any idea how much traffic one could run through that Cloud VPN I have set up?

Server specs are the bottom rung, and I was just wondering.

Everything's just passing through that server, so I'd expect it shouldn't become any sort of a 'bottleneck' unless "A LOT" of data is moving through it.

I don't know Lightsail, but it sounds pretty much like a VPS. You can rent VPS'es of varying power for varying prices. Linode and OVH are just two examples of companies that also do this sort of business. I've heard that Amazon likes to charge per data coming in or out, whereas different VPS companies have different models... some allow you to hit a max and then reduce your bandwidth.
You must log in or register to reply here.
Share:
Facebook Twitter Reddit Pinterest Tumblr WhatsApp Email Share Link
Top Bottom