Hi all! Something pretty odd happened during yesterday's release of Big Sur, so I figured I'd make a post. I already sent @Steve a DM on Twitter about it, since it might be something to cover on SN.

I noticed yesterday that, out of the blue, it was taking anywhere from 30 seconds to 5 minutes to launch non-Apple apps on my Mac. I figured there was some kind of memory leak, so I restarted the machine, but the problem persisted. For a second I was worried about some kind of hardware failure, since the machine kept beachballing and mouse movement was laggy. Things got weird when the same problem happened on another of my Macs at the same time.

Apparently, whenever you launch an app on macOS, the trustd daemon will send a hash of that app to ocsp.apple.com for verification. Apple was having some massive outages yesterday related to the Big Sur release, so while this server was still online, it was taking a long time between requests. The temporary fix was to disconnect from the internet (which stops this mechanism) or block/redirect that DNS entry using the hostfile or at the router. Supposedly this is sent in the clear per https://sneak.berlin/20201112/your-computer-isnt-yours/.

I think there's some pretty big privacy implications here, especially since there have been some changes to the network stack on Big Sur. Application firewalls like Little Snitch and LuLu can no longer block certain processes Apple includes on their "ContentFilterExclusionList", see
https://twitter.com/i/web/status/1327034191523975168
.

I figured this certainly would be worthy of discussion here
P

This is simply a bad design choice by Apple. They really should find a different mechanism than an always on query for every attempted app launch. It's technically the most secure way, if a large number of apps were being added to the block list regularly, but one can hardly presume that to be the case. Check ONCE at install, remember the result, and have a mechanism to push updates to the bad list regularly. Yes, in theory an app which had been delisted would still be allowed to run on some devices for some time after being delisted, but doing it the way they do is just asking for abuse. Imagine if somone MITMed their service somehow and declined all app launches on all Macs everywhere! It would be pandemonium, and potentially unfixable until the MITM were resolved.

omg! I saw that earlier.

It's not just terrible design. It completely goes against their own speech about user privacy.

And if you think that is an Apple thing, keep dreaming. Windows 10 has is also bloated with telemetry software, by design. I've been wondering why Microsoft decided to allow people to keep using an unlicensed copy of Windows indefinitely. I guess this is the answer.
0

Great points about bad design and Windows 10 telemetry. It caught me a bit off guard, to be honest. The article I posted was pretty sensationalist (Louis Rossman made a video on YouTube that went even further down that route), but I think it does raise a few good points about all of this being one in the clear and how this could be subject to abuse. I'm curious to see if Apple even responds to it. Ars did write an article on it, but didn't really delve too far into the notarization process. I did find a post from Eclectic Light Company that really explained the notarization process pretty well https://eclecticlight.co/2020/08/28/how-notarization-works/.

I agree and I disagree.

trustd uses the OCSP protocol, which is plain text. Guess what, your web browser also uses that protocol in plain text when you visit a TLS protected website (unless you're using Google Chrome, because Google decided so).
It is used to confirm whether a X.509 certificate is revoked or not.

I had a feeling that this was the place to come for a really in-depth explanation of what's going on here Seriously, thanks @Ed7789 for taking the time to clearly explain all of this. The design makes much more sense to me now. I would think it's pretty clear that the security advantages of such a system outweigh the potential for abuse. From what I've read, I believe the system will fail safe if it cannot resolve an address for ocsp.apple.com, but since the servers were reachable (but slow to respond), the problems occurred.
Reactions: EdwinG

0xdd said:
I did find a post from Eclectic Light Company that really explained the notarization process pretty well https://eclecticlight.co/2020/08/28/how-notarization-works/.
Click to expand...

Howard is a genius. His site is gold.
A

you can't stop this process or the system won't run your application. However, you could use something like little snitch or hands off! to restrict applications from calling home 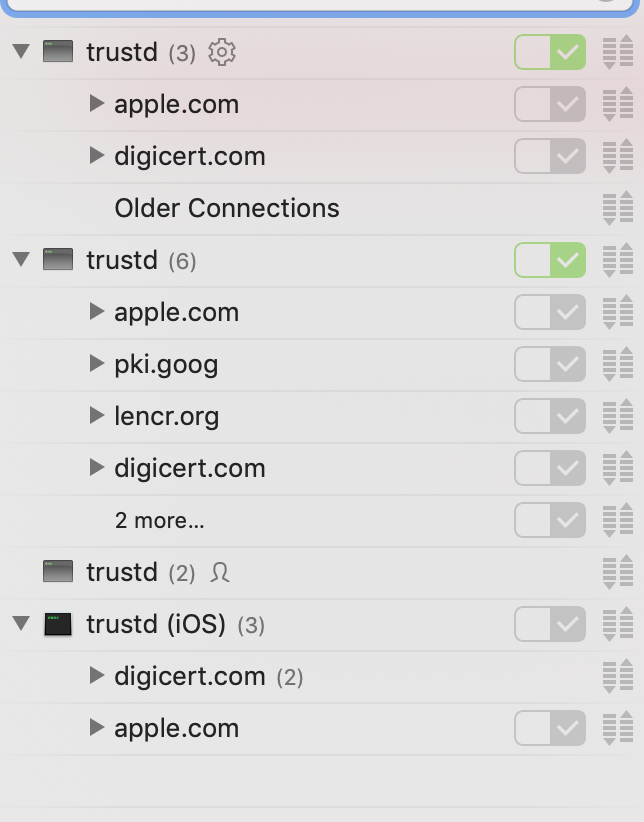