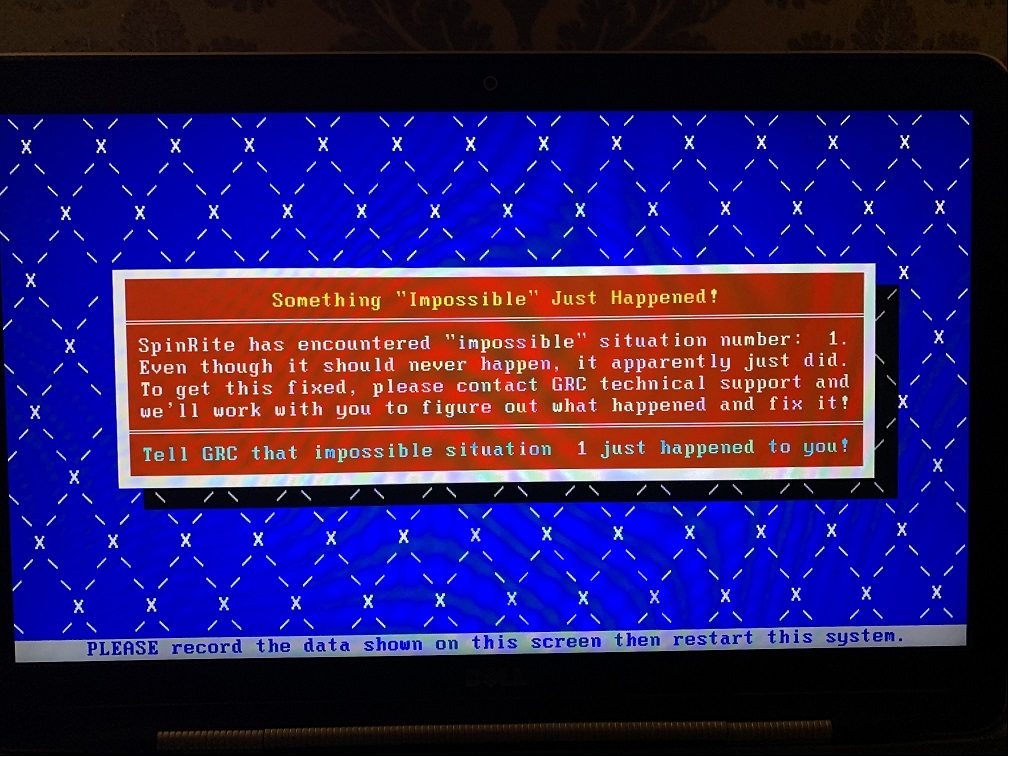 Hehe, do it again

Seriously, you should report it in the newsgroups.
Reactions: Barry Wallis

Tazz said:
Hehe, do it again

Seriously, you should report it in the newsgroups.
Click to expand...

Or for even faster support, contact GRC directly: https://www.grc.com/support.htm
P

I don't think GRC Support is for development issues, the newsgroup is the right place.
Reactions: Steve and Barry Wallis

PHolder said:
I don't think GRC Support is for development issues, the newsgroup is the right place.
Click to expand...

Agreed. I didn't realize it was the dev version.
Reactions: Steve

Tazz said:
Seriously, you should report it in the newsgroups.
Click to expand...

Yeah, I tried to join the news groups several times using Gravity, but I did not like the layout & even after setting up an account could not post for some reason. So I gave up in the end, and now just read posts with the web version, and use this forum. Perhaps one of you could add it to the dev group please.
Reactions: DiskTuna
A

Nope. Greg is 100% out of the loop for pre-release stuff.

Mervyn Haynes said:
Yeah, I tried to join the news groups several times using Gravity, but I did not like the layout & even after setting up an account could not post for some reason. So I gave up in the end, and now just read posts with the web version, and use this forum. Perhaps one of you could add it to the dev group please.
Click to expand...

We'd LOVE to have you there, Mervyn. I may eventually get over here. That's why I created these forums. But I do not intend (I really just cannot) to be fully active and managing things in both spaces. PLEASE come over to the newsgroups and tolerate Gravity. Also, Paul Holder, I believe, likes a different very capable Newsreading client. So there ARE others!

Oh... and, of course, you don't REALLY need to worry about that, since it's impossible!
P

Yeah I use a news reader that was written in Delphi and is a little long in the tooth (but maybe not as long as Gravity) and I like it much better than Gravity. As for not being able to post, you probably just need to read the instructions very carefully on Steve's page about setting up the reader (there are specific requirements about username and password.)

XanaNews on GitHub: https://github.com/graemeg/xananews/releases/tag/v1.21
Setting up the client: https://www.grc.com/discussions.htm (scroll to bottom pay attention to instruction 3.)

I find Mozilla's Thunderbird serviceable and yes, you definitely need to read the links above on setting up a Newsreader so you can post. It drove me crazy for a few days until I figured it out.
Reactions: Tazz and Dave

OK, I will give it one more try to join. Can't do it for a couple of days as I have other commitments.

On the difficulty of posting to GRC's NNTP Newsgroups: It's unfortunately necessary and deliberate.

I don't know how much of a problem it might still be, but once upon a time there were NNTP newsgroup spamming bots loose on the Internet. One of the solutions that is employed for combating Bot posting is to simply do something that a bot won't know. THESE Web forums are kept clean, in the presence of a TREMENDOUS amount of pressure from outside Bot and Human postings, by a combination of automated tricks and our human volunteer moderators. The sign-up form here has a bunch of bogus hidden fields that bots unknowingly fill-in, and when they do they are greeted with a pseudo-success and are allowed to falsely believe that they have succeeded.

As our moderators here know, I've invested heavily in working to catch and block bogus registrations. I figure that keeping actual human postings in line will be enough work without adding automated nonsense to the load. So I'm happy to report that bogus registrations have been zeroed. But it took some doing. I wanted to get that done before SpinRite happened, since THIS is slated to be SpinRite's official support home and it's DEFINITELY going to be VERY busy once v6.1 happens.

And for the NNTP Newsgroups... there wasn't much to work with that would not be a bother to legitimate posters. I could have required that passwords all contain a specific string somewhere. But I liked the idea of simply requiring that the username and password be the same. Since NEITHER of them are published in postings, they are essentially secret. And the fact that the user's client (only) DOES display the username means that no one is ever forgetting their password. It's worked out damn near perfectly for years, and it sets the bar just high enough that someone needs to want to post to be able to figure out how to.
Reactions: AlanD, SeanBZA and Barry Wallis
You must log in or register to reply here.
Share:
Facebook Twitter Reddit Pinterest Tumblr WhatsApp Email Share Link
Top Bottom