^Humou?r (AKA Recreation for Nerds Who Enjoy Levity!) Put it all here!

I've always been fond of the binary (base 2) statement: There are 10 kinds of people, those that understand binary and those that don't.
Reactions: dlc96_darren, Tazz and danlock

PHolder said:
I've always been fond of the binary (base 2) statement: There are 10 kinds of people, those that understand binary and those that don't.
Click to expand...

11 cheers for binary.
Reactions: dlc96_darren, pebkac, danlock and 1 other person

Then there is always the New Math (first in decimal and then in octal).
Reactions: Mervyn Haynes

Barry Wallis said:
Then there is always the New Math (first in decimal and then in octal).
Click to expand...

Very good
I have always wondered why the US calls it math, & in the UK we say maths. After all it is mathematics
Reactions: Barry Wallis

It's probably similar to other words with identical meanings and different spellings, such as humor = humour

The Oxford English Dictionary, the ultimate source for all English words, says: "Math. is used as an abbreviation in written English in the U.K. but not in speech, the normal form being Maths".

I'm American, but I often place punctuation marks outside the quotation marks because I got into that habit at a very young age when programming. If I put punctuation inside the quotation marks while coding, it's treated as a textual string rather than as an operator (as you all know, I'm sure). (In this case it was merely copypasta (copied and pasted) from another site and to pay respect to the OED, which, as a product of England, probably does it that way by default.)

That's probably also why I don't really have a problem with nested parenthesis (rather than the more frequently used in-print method, alternating parenthesis and square brackets [..(..[..]..)..], or whatever your preferred style guide indicates). I've noticed a lot of punctuation reduction in printed texts over the past 20 years. That might be another change resulting from this online world in which we now live.

The largest change seemed to begin around 1997-'98 when the "average human population" began to invade the internet, adding to positive and negative diversity of all kinds. It had formerly been a place where you could go and be pretty certain you were talking to other "smart people," among nearly all of whom there was a mutual respect of sorts. I'm sure most people reading this—who are not too young—will remember that with more alacrity than I can. That mutual respect-of-sorts has long since been tossed aside and allowed (or forced) to decay where it was discarded, a place on the Information Superhighway where the smoothness of the road gave way to potholes and bumpy rides, later shifting to exponentially increasing speeds and capacity with its underlying, variably pock-marked highway haunted by malware-marauders (malauders? malhawkers?*) and overlaid with advertisements, phishing bait of all types (each containing a nasty hook tied to a line with nearly infinite tensile strength), traffic diversions, and dead-ends that redirect the oblivious innumerable masses of packets/vehicklets down undesired pathways where they gain additional unwanted passengers (barnacles, leeches, etc.) and have less control over their packet-vehicles than they think, while still achieving transfer speeds high enough and ping times low enough that they don't notice the holes and gaps, misdirected pathways, and malware tunnels (or troll-guarded bridges) through or over which they've traveled before arriving at their destinations.


*I derive malhawkers from malware + jayhawkers, the latter a term used during the US Civil War, described here:​

The jayhawkers are thieves. They plunder indiscriminately from all parties. In the same band are both rebel and Union men. [Henry M. Painter, "Brief Narrative of Incidents in the War in Missouri," Boston, 1863.] (source)
Click to expand...

​
Most of the '90s and until 2008-or-so were, for me, a more-confused SMEAR than Windows 10 will ever be. Come to think of it, every time in my life which has consisted of more than a few days or weeks that were similar to each other is like that. 2020, while different for most people (from what I've read), has not really been different for me from any year preceding it (after the first quarter of 1990) except for certain elements, such as how I didn't ride my bicycle as much during the summer as I usually do; it's my primary mode of transportation, so I've been overweight and relatively out-of-shape.

In chatrooms and on message boards like this, we tend to type things as we say them, making these places more a physical representation of spoken dialog(ue) than a collection of more-formal written messages, like BBSs or USENet, places that served a relatively tiny portion of all humans and were thus easier to moderate by Sysops and users (and whatever they used for moderation on CompuServe, GEnie, and the like).

Typing things as we say them can lead to problems (as I see it, though many probably don't) if we fail to use punctuation in the manner that so many "youngsters" do nowadays, since that leads to strings of run-on sentences and/or sentences with ambiguous meanings. You'd think they would have learned those basic elements of sentence construction as children, but I guess the digital elements of the world made a larger (or deeper and longer-lasting) impression on their brains than did the scholastic elements.

Another hypothesis: Maybe this is how the language is changing. The English language is always changing and evolving, making it an example of something for which the only constant is change. The speed at which this latest evolution of the language is occurring is yet another reason why the OED will probably be under constant revision for the foreseeable future.


There are certain words for which I typically prefer to use the UK spelling, something I think is a result of childhood reading and re-reading of many books and stories by Herbert George "H.G." Wells, Clive Staples "C.S." Lewis, and Jonathan Ronald Reuel "J.R.R." Tolkien, among others.

I even read some (I can't remember which!) of W. Shakespeare's plays (textbooks my mom had saved from University), something I'm glad I did then rather than later, because there was a LOT of sexual innuendo that went over my young head, with its childhood naiveté. I did not read those multiple times as I did the more modern English writings of the authors I listed previously. However, there are a lot of Shakespearean references and quotes in all of Star Trek, including many of the main actors, who were Shakespearean actors before acting in television (and motion picture) Sci-Fi collectively known as Star Trek.

You'll recall that one has not really experienced Shakespeare until one has heard it in the original Klingon.
Last edited: Oct 28, 2020
Reactions: Paul F
3

Classic one (probably you heard it) but for the record...

Little Jimmy took a drink
But he will drink no more
For what he thought was H2O
Was H2SO4
Reactions: danlock and 303tek

Relaxing as I go with Frankie to Hollywood, way back in the '80s when I was smart.

danlock said:
I'm curious: The initial post in this thread received no in-line responses expressing either revulsion or laughter. I even inserted a humorous intro to increase its potential "humor-rating." Was it neither immediately funny nor immediately revolting, or did it take too much time to sink in before the following message was absorbed and laughed at?
Click to expand...

I think you are trying a bit too hard. As frankie said Relax!

This is not new, but can be amusing for a bit... 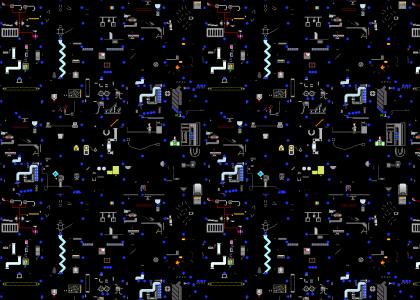 The original domain had been deleted, so I decided to create a new YTMND with the old domain.

Here's a link to a text file which many of us may find humorous.

I am fond of the one from 1990.
Reactions: danlock

One of the three from 2017 contained some ideas which might seem relevant here, especially for lovers of ASCII. If there are any ways to exploit these, they will be found sooner or later, if they are not already being exploited.

Text source (including the misspelled "menagerie," which is part of the RFC, excluding the italicized text near the end which I added to reference RFC 8174): RFC 8140


(Possibly also now or in the future, in this universe, an alternate universe, another reality, or anywhere, this [RFC8774] might be relevant to this informative disclosure or any other networking or computational function or exploit: RFC 8774 )​
and now for the majority of and principal reason for the message, the quotes from the source:

Browsing the server where Steve found his old magazine article, linked in the SN-801-Notes file (I used too much time when considering the results I thought were worthy of being saved locally), I discovered some old text the type of which you would find on BBSs and USENet in the old days. Some of it is mildly humorous, some is filled with pseudoscience, and some is just plain weird. Here's an example of Unix parser fun:

OK, one more for now... for all new PC owners! NEVER MOVE YOUR PC WITHOUT GOOD REASON! and "DON'T worry much about viruses. They're dying down now." hehe. This guy knows his stuff! "seen it all and done it all"
(Some DOS stuff removed to reduce message length.)

A truck driver, hauling a tractor-trailer filled to capacity with computers, stops for a beer near a freeway exit somewhere in northern California. As he approaches the bar, he sees a big sign on the door that reads, “COMPUTER NERDS NOT ALLOWED! ENTER AT YOUR OWN RISK!” He walks in and sits at the bar.

The bartender walks over, sniffs, and remarks, "You smell kind of nerdy." Inhaling again through her nostrils as she wipes some debris off the bar in front of him, she asks, "What do you do for a living?"

The truck driver explains that he drives a truck, and the smell is from the computers he is hauling. The bartender serves him a beer and says, “Welcome! You're not the kind of computer nerd I'm wary of.”

As the trucker sips his beer, a skinny guy walks in wearing a pair of glasses with tape around the middle, a pocket protector with 12 varieties of pens and pencils, and a belt that is at least a foot too long. Without warning, the bartender whips out a shotgun from behind the bar and blows the guy away. The truck driver asks why she did that.

The bartender replies, “Don’t worry! Computer nerds are in season because they are overpopulating Silicon Valley. You don’t even need a license.”

So the truck driver finishes his beer, climbs back into his rig, and returns to the freeway. Suddenly, he veers to avoid an accident and his load shifts. The back door bursts open and computers spill out all over the road. He jumps out and sees a crowd of looters already forming, snatching up computers as fast as they can. The scavengers are all computer geeks who look younger and less-experienced than than security-savvy, wise geeks (not that the truck driver necessarily knows the difference after the single glance he just got). They stand out because they're all wearing the nerdiest-looking clothing he has ever seen.

He thinks, I can’t let them steal my whole load! So, remembering what happened in the bar, he pulls out his gun and starts blasting away at the crowd.

A highway patrol trooper zooms up, jumps out of the car, and yells, "Stop shooting!"

The truck driver complies. He asks, “What’s wrong, officer? I thought computer nerds were in season.”